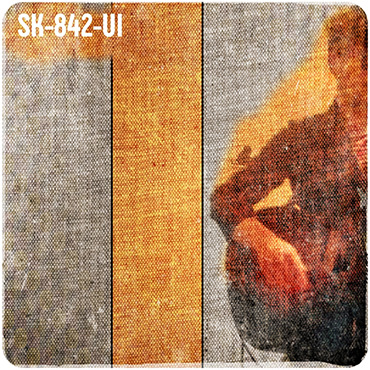 Sk-842-Ui
by
Ljupa Angelov a.k.a.  Lepi Xhoni
total Length: 33:11
a pmg recordings digital Release
recorded & mixed @ Lepi's BedroomAudio Workshop, during the Covid-19
Lockouts through March, April & Mai. It all started from the thing that
has been 10 years after "Nie sme Od Skopje" came officially out, which was
a huge success, as for pmg collective, but also for my then active band,
called the John (which did a remix of the original track). That theme ( the beat,
the bass line, the singing & the style "diskoPunk" in general) got very deep
underneath my skin, it basically started running through my veins, because back then
my gang was especially by the sond DFA recordings was releasing, and today (10 years after)
we still exist, as musicians if not as band, and still enjoy makeing music, more than ever,
so when I was asked to do remix of my remix (or something like that) I just could not get
sattisfied with only 1 track (which was the orriginal deal), instead I made a spontaneus,
half an hour "diskoPunk" Jam which I named "Sk-842-Ui", bytheway that's the number of
my car plates, if not too obvious ;) ... hope u'll like it and play it around. I shure did haf
a lot's of fun making it, and it's danceable music, which I did all by myself,
using beat samples, a bass guitar, few synhts and a Jazzmaster.
Yours truly, Lepi Xhoni. [05.20.2020]
Format: mp3